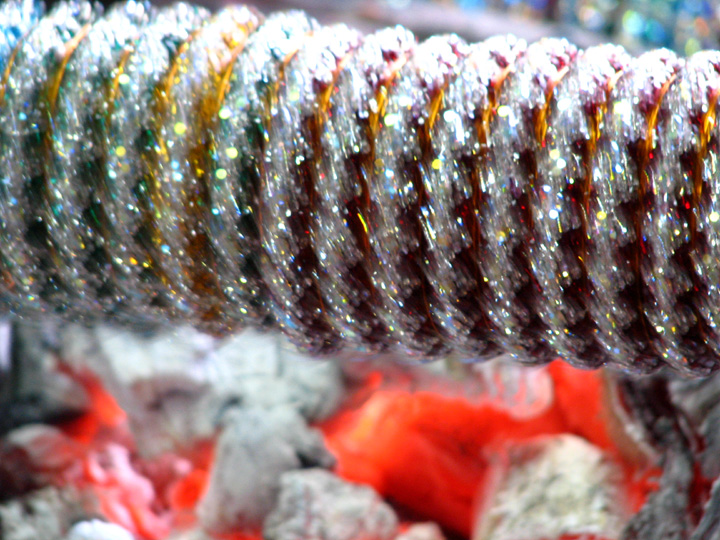 I scanned the shop for any anomaly. The ledger was in its place, the cash drawer was locked, as were the shelves. Everything looked normal. I turned off the light. Once the momentary blindness passed, I could see everything under the dim light of the the electric lamp. I gazed at the picture of Goddess Lakshmi illuminated by the lamp above. “Give me your strength dear Goddess. Help me lead my life with dignity, peace and freedom,” I whispered. Lakshmi smiled at me. I was doing the right thing.

Outside, I pulled at the shutter. But it refused to budge. The shop assistant had already brought it half-away down before he left. But it stayed stuck now. For a moment, I pondered at the idea of leaving it the way it was. There was no one around to help anyway. It was past 11 and the shops nearby had long since closed.

I tugged at the handle. The winter chill that rendered it immobile began to creep into my fingers. Finally, the shutters creaked, protested and rolled down into place. My bangles clinked as I locked the shutters. In the silence of the night their usually mellifluous tones seemed coarse. Loud, an unnecessary intrusion that disturbed the sleepiness of the night. I stared at them for a moment. Leaving the keys dangling on the lock, I sat down on the doorstep and began to remove them.

One by one, I placed them on the floor. The pink bangle for a childhood full of dreams. Yellow with its promise of marriage and a new life. Purple for the first time he hit me. The green for the hope that bloomed every now and then. The blue for the sadness that never seemed to go. The red ones for the violent times. I looked at the plain golden one that was left. As I was about to remove it, I felt myself pause. Let it be. Maybe the best time of my life would begin now. Golden.

I got up and looked at the bangles. They looked out-of-place besides the rusting metal shutter and shiny new lock. I looked at my almost free wrists. Bare but for the two golden bangles and the burn mark on the inside of the left wrist.

Would Soham know what they meant when he saw them in the morning? He had to notice the bangles when he bent to undo the locks. Would he realize they were mine?

Inside, nothing would seem out of place; not till the time he discovered the empty cash register. By then I would already be on a train, far away from him. He would curse me, cuss under his breath, wait till his assistant came, and then head to my sister’s home. He wouldn’t hit her out of anger, would he?

The thought persisted as I walked down the street. The money was safe in my handbag. I had managed to scrimp and save just 10,000 rupees in the past year. It was not much…but it was enough. I chased my own shadow, meek under the faint streetlights. I wanted to walk fast, I wanted to run, I wanted to leave.

Ahead, I saw a cop walking towards me. I was about to involuntarily reach out for the handbag but stopped myself in time. My heartbeat rose like a swelling wave. Louder, more powerful. I waited for the cop to stop me. I waited for my only hope of freedom to crash. But the cop walked by without even a glance in my direction.

Wrapping my sari around me like a shawl, I picked up my pace. Sweat was streaming down my back now despite the early winter chill. I was almost there. Vikas would be waiting. I walked past a group of men, warming their hands over a makeshift fire. They looked at me, but I knew they would not recognise me. I didn’t live here and was an infrequent visitor to these parts of town.

He was waiting at Sushma’s doorstop, anxiety written on his face. He rushed to me as soon as he realised it was me.

“Maa!” He yelled, hugging me as tightly as he could with his little arms.

Sushma walked towards us, a worried smile on her face.

“Did you get the money?”

Nodding a yes, I turned to look at Vikas, who was patiently waiting for my attention. I bent down to look him in the eye. My son, how different he was from his father. “Are you ready to go on an adventure with Amma?”

“Do you remember what I told you earlier? On the train, if anyone asks, we are going to tell them we are from Nagpur and we are returning home after visiting your aunty here in Mumbai.”

“I remember, Amma. And if they ask about Baba, I will say he left us. That we only have each other in the world.”

I kissed my son on his cheek. Sushma held out the tickets. I hugged her tightly. I knew she was risking Soham’s ire by helping me, but I also knew he would not suspect she helped us. He would assume it was my sister who had helped us escape. Not his own.

Brushing away her tears, Sushma handed me my bag. I had hidden them slowly and steadily over the month at her place. “Go,” she urged pushing me towards the door. “The train is in an hour and if Soham comes…”

I laughed at her words. “You know he can’t find his way back home at this hour. He will be drunk beyond his senses by now. How will he even come here!” As I heard my own words, their reality settled into my being. I felt a sense of ease at the realization I was truly free at the moment. I had nothing to fear now. Maybe I had nothing to fear anymore.

“Ready?” I asked Vikas, extending a hand to him.

As he placed his palm in mine, Vikas noticed my almost empty wrists. “Amma, where are your bangles?”

Smiling, I looked at my wrists and then at him. “I don’t need them anymore. I like them this way…free.”

One thought on “Bangles”